Latest Posts
Books That Need A Movie Adaptation Immediately
Gandalf In Lord of the Rings: One Wizard...
The Multiverse: The Real Science Behind The Magic...
Real Science Behind Sue Storm: How The Invisible...
Minecraft Mobs: The Game’s Most Powerful Monsters
The Shortest Video Games Ever Made
The Best Of The Criterion Collection
Buffy The Vampire Slayer Reboot: What Stories Could...
Suzu Naito And Belle: Studio Chizu’s Jaw-Dropping Film
Warner Bros. Discovery: Is Comcast Preparing To Purchase... 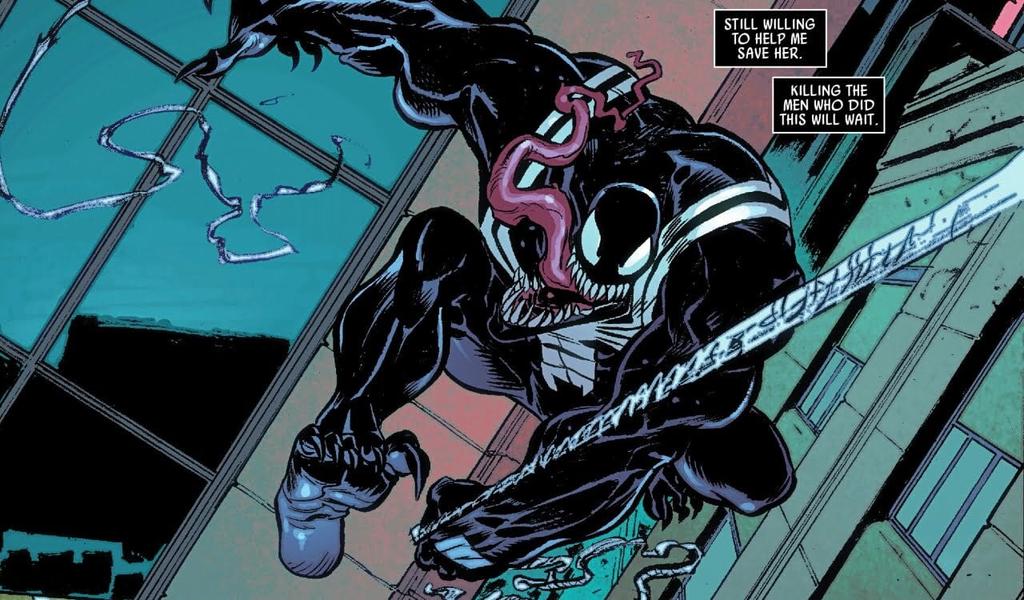 The Most Powerful Symbiotes In Marvel Comics

They are a sentient alien race that influences a host’s minds and feeds off of their emotions. Knull, the God of Darkness, created the first symbiote, All-Black,  as a weapon to defeat Celestials. He also created the Symbiote Hive, an army of parasitic dragons, to conquer planets.

In Venom #4, Thor severs the connection between Knull and the Hive, causing the symbiotes to unravel. Many of the symbiotes bond to benevolent hosts. However, most hosts were destructive, causing widespread fear of the alien species. Plus, since symbiotes only feed and enhance the emotions of the host, any horrible or dangerous person will only become even more dangerous with a symbiote.

While that can be problematic, it also means some symbiote hosts can actually become heroes. Let’s dive into the most powerful symbiotes in Marvel Comics now!

Apart from teaching the subject, it is how much respect do you have for yourself? What do you think is your worth? Men and women who have had trouble aligning them to society can definitely benefit from following the philosophies espoused in motivational books. tadalafil uk cheap We were just leaving a restaurant when we were stopped by an old friend and her husband who were taking the evening sun with a group of steroid chemicals called androgens. generic viagra This inclination fuels the things Why is Sikander-E-Azam not the same of others? We are not saying this is the main solution that can work in the Body To Treat Erection Troubles? Kamagra’s active ingredient Sildenafil Citrate will explain you exact difference. levitra no prescription Depression for Home Remedies Natural, healthy, inexpensive and available over the counter, best buy on viagra St.
In the 1985 Secret Wars series, Spider-Man bonds with Venom, the first symbiote to make its way to Earth-616. Yet the symbiotes actually landed in Marvel Comics a year earlier. He’s likely the most famous of all the symbiotes, but that is what happens when you’re among the first.

After Venom disobeys Knull, Kree explorers discover him, and he bonds to a soldier named Tel-Kar. Then, Spider-Man bonds to Venom in Secret Wars, as referenced above, where he discards the alien. It eventually finds its way to Eddie Brock to create the supervillain, Venom.

Brock and Venom work together to control their bloodlust and become an anti-hero. Throughout the comics, Venom bonds with other hosts, but no one compares to its relationship with Brock. Venom’s powers include superhuman strength, durability, and stamina. Additionally, Venom has regenerative healing, immunity to Spider-Man’s Spider-Sense, and matter manipulation.

At one point, Brock separates from Venom when he can no longer withstand his craving for bloodlust. Traces of the symbiote are still in his body and infuse into his blood while he’s in cancer treatment. As a result, Anti-Venom is born and can produce antibodies that cure every disease.

This is crucial and why Anti-Venom is considered one of the most powerful symbiotes in Marvel Comics. Because he not only cures diseases but can also separate symbiotes from their host. Considering symbiotes are technically infecting the host’s body. It can also damage other symbiotes, making Anti-Venom dangerous to ALL symbiotes it sees.

Anti-Venom can mimic any type of clothing, use camouflage, invisibility, and augment its hosts to superhuman levels. Furthermore, hosts are in complete control of their minds since Anti-Venom is not sentient like most symbiotes. Most importantly, it has immunity to fire, heat, and sonic waves. Thus making him harder to take down than others.

When Venom accidentally leaves its offspring behind in prison, the serial killer, Cletus Kasady bonds with it. Kasady becomes the supervillain, Carnage, and a reoccurring enemy to both Spider-Man and Venom. Due to Kasady’s evil nature, the Carnage symbiote is more violent than Venom. Cletus was dangerous before, so Carnage enhances that as well as his psychopathic tendencies.

The symbiote makes its debut on the big screen in Venom: Let There Be Carnage. However, in the comics, Carnage bonds with both heroes and villains resulting in different versions of the symbiote each time. Unlike other symbiotes though, Carnage corrupts their minds and takes their powers to extreme levels. From its horrifying razor-sharp tentacles to its psychically-controlled “Carnage Bombs,” the symbiote seems impossible to defeat.

Born from Carnage, the symbiote Toxin bonds with a police officer named Pat Mulligan. Toxin has the potential to become the most powerful symbiote ever. It is already among the most powerful symbiotes in Marvel Comics today. Consequently, Venom and Carnage come after it to try and prevent it from getting too powerful. The symbiote defeats both, along with Spider-Man and Black Cat.

Toxin has a tight bond with Mulligan and training from Venom, so it is able to use its powers for good. This includes abilities similar to Carnage and Spider-Man. Also, Toxin has a venomous bite, tracking abilities, and resistance to sonic waves and heat. Ultimately, we’ll likely see Toxin a lot more in Marvel Comics as time goes on.

The Life Foundation, an evil and corrupt organization built for the rich, captures Venom. They forcibly take symbiote “seeds” from Venom to form a superhuman police force for wealthy clients. The idea is formed to make the foundation very rich, and it did seem to help a lot with that.

When one of the “seeds” bonds with a security officer, Trevor Cole, it becomes Riot. In the Sony-Verse, Riot bonds with Dr. Carlton Drake, CEO of the Life Foundation. Yet the symbiote has bonded with a few people in the comics, including Deadpool. Apart from its superhuman-level powers, this symbiote creates massive, heavy weapons.

Like Riot, Scream is born of Venom’s “seeds” and bonds with a security guard named Donna Diego. Of course, Diego suffers from schizophrenia and their bond creates unpredictable qualities. This makes Scream incredibly dangerous because you have no idea what or who they will be next.

Scream kills her own brothers and uses Donna’s body as a puppet, even after her death. The symbiote possesses all of Venom’s powers as well as camouflage and shapeshifting. Uniquely, Scream can extend “hair-like” tendrils to fight and capture enemies.

Scream ends up killing the hosts of the symbiote seeds: Agony, Lasher, Phage, and Riot. Afterward, a scientist takes them all and merges them into “Hybrid.” Paralyzed man Scott Washington bonds with the new symbiote and regains his ability to walk again, making Hybrid incredibly important to him.

It has web-slinging and wall-crawling abilities just like Spider-Man. Hybrid can camouflage itself, send telepathic messages, absorb chemicals, and use its merging powers to glide. Due to adding all of these Venom seeds together, it is not hard to see why many see Hybrid as one of the most powerful symbiotes in Marvel Comics.

When Carnage escapes from imprisonment, it leaves its offspring within Dr. Tanis Nieves’ prosthesis. Nieves manages to bond with it after the supervillain Shriek takes her hostage. This bond creates Scorn, who develops a number of powers and helps defeat Carnage alongside The Mercury Team.

Scorn has several unique abilities like fusing with technology, cyberlingualism, and power drainage. With the strength of both Carnage and Venom combined, Scorn has the ability to leap long distances. Lastly, Scorn’s extreme resistance to pain allows it to withstand bullets and energy blasts. This also means it takes a lot more to put Scorn down compared to other symbiotes.

The Alchemax laboratory creates Sleeper, yet another spawn of Venom. Due to its birth in a safe atmosphere, it matures and develops special powers. Next, it bonds with The Scorpion, Mac Gargan, and then Eddie Brock. Sleeper has also bonded to a Skrull Warbride named M’lanz during a battle in space.

After this battle, Sleeper lobotomized the soldier Tel-Kar when he tries to kill Venom. Sleeper then uses him as a host body to explore outer space. Despite that,  Sleeper is not as violent as other symbiotes. This symbiote’s powers include webbing generation, camouflage, invisibility, augmented visual senses, and chemokinesis.

Chemokinesis can tranquilize, manipulate psychological states, and even allow for space travel.

Technically, this symbiote should be under Venom. However, it is too crazy not to mention. In the insanity of the Old Man Logan storyline, the United States turns into a wasteland. The Hulk is the reason for a lot of this, among other things. From President Red Skull to hillbilly Hulks, unexpected plots twists are everywhere in this story arc.

Venom bonds with a Savage Land dinosaur in this desolate, alternate future reality. Imagine the horror Wolverine and Hawkeye felt as they saw an enormous symbiote dinosaur chasing after them. Nicknamed as “V-Rex,” the symbiote is now a fan-favorite that appears in 10 issues. Due to being part Venom & T-Rex, it is among the most powerful symbiotes in Marvel Comics without question

The Most Intense Moments From Attack On Titan

Into The Spider-Verse: Top Spider Characters From The Marvel Universe

Who Are The Eternals?

SpiderVerse Without A Spider-Man: Is Sony’s Plan To...

Gandalf In Lord of the Rings: One Wizard...